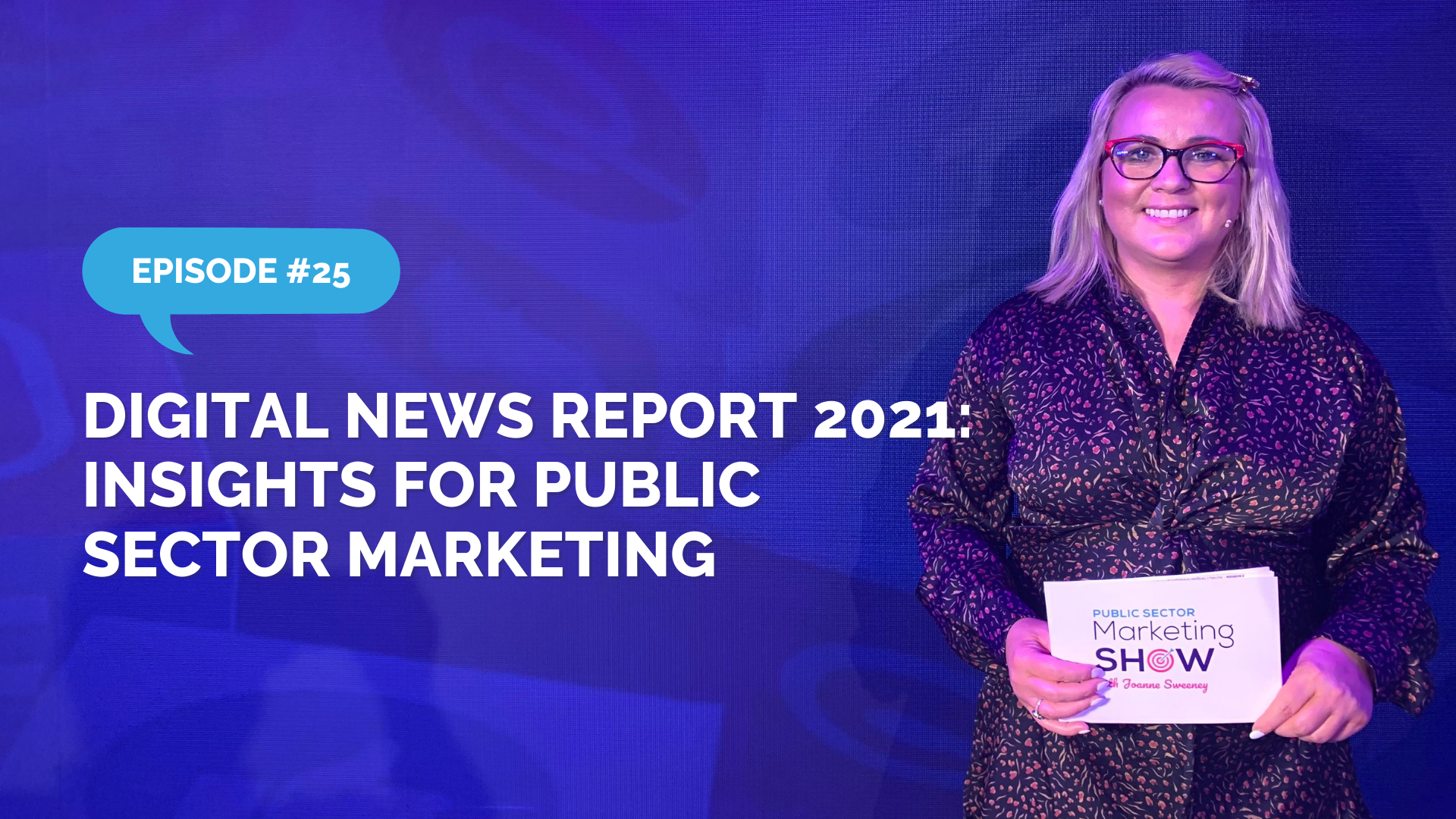 Every year I look forward to the publication of the Digital News Report, a study of how news is evolving in the Digital Age.

It’s a global study of over 92,000 online news consumers in 46 countries conducted by Reuters Institute and University of Oxford. This year’s study is shaped by the pandemic and how COVID-19 changed the news consumption habits of citizens across the world. But what does this mean for public sector marketing pros and how do you engage with media and the public?

Coming up in Episode 25 of the Public Sector Marketing Show I review the Digital News Report 2021 and its impact on public sector marketing.

Every year I look forward to the publication of the Digital News Report, a study of how news is evolving in the Digital Age. | #DNR21 #DigitalNewsReport21 #PublicSectorMarketingShowClick To Tweet

Subscribe to The Public Sector Marketing Show or your preferred podcast platform.

I'd really like your opinion on this topic. Tweet me your views to @JSTweetsDigital. Don't forget to use the hashtag #PublicSectorMarketingShow

News has changed forever and it's the shift in news creation and consumption that public sector pros need to be most concerned with.

News is no longer a commodity that belongs to media companies. News is created by all types of demographics, even as this report outlines by "ordinary people" and this trend of news consumption from ordinary people is growing rapidly.

The Broadcasting Authority of Ireland (BAI) has funded the inclusion of Ireland in the study, as part of its work on fostering media plurality in Ireland. The BAI commissioned the Institute for Future Media, Democracy and Society (FuJo) to produce a specific report on the Irish results of the survey. With surveys conducted early this year, this year’s report gives an insight into changes seen in the Irish media industry after almost a year of living through the Covid-19 pandemic.

This year’s Irish report was authored by FuJo’s Colleen Murrell, Kirsty Park, David Robbins, and Dawn Wheatley. The report will be of interest to anyone who wants to know more about how we consume media in Ireland and in particular it looks at how we engage with news and technology and our attitudes towards trust, disinformation, and paying for news.

The report also features some short essays including:
Colleen Murrell: Long Live Television: COVID-19 and trusted media
Dawn Wheatley: Diversity and Representation: Do audiences like what they see?
Dave Robbins: Key Decisions for the Future of Media Commission
Eileen Culloty: Media Literacy and the Future of Media
Roddy Flynn: Media Ownership in Ireland

Lead researcher, Professor Colleen M. Murrell said:
“Through the annual Digital News Report, and other major research projects, DCU’s Institute for Future Media, Democracy and Society (FuJo) continues to build a critical knowledge base for the Irish media, and we look forward to reporting and contextualising this year’s insights at tomorrow’s event.”

This week's question is from Kathleen from Marine Institute.

She asks, "If the news is trusted more than social media, do we focus more on traditional PR?"

Tune in to the show to hear my answer!

Do you have a burning social media or digital marketing question? Leave me a voicemail here and I'll answer your question on the show.

On Wednesday 23 June, Edelman UK hosted the 2021 Reuters Institute for the study of Journalism's Digital News Report. Nic Newman, Senior Research Associate and Lead Author of the report, highlighted the key findings from this year’s study.

Following this, Ed Williams, President and CEO, Edelman EMEA, hosted a panel discussion with an expert panel including:

Also, get a 50% discount on a course of your choice with us!

Thank You for Listening!

Thank you for tuning into episode #24. If you are a regular listener, please rate and review our show.

Don’t forget to get in touch with your questions. I love hearing from my listeners, don’t be a social media stranger. Tweet me at @JSTweetsDigital

If you would like to be a guest on the show, please get in touch. Email Joanne at info@publicsectormarketingpros.com.

If you haven't already, please subscribe to The Public Sector Marketing Show or your preferred podcast platform.