The CopDoc Podcast with Joanne Sweeney 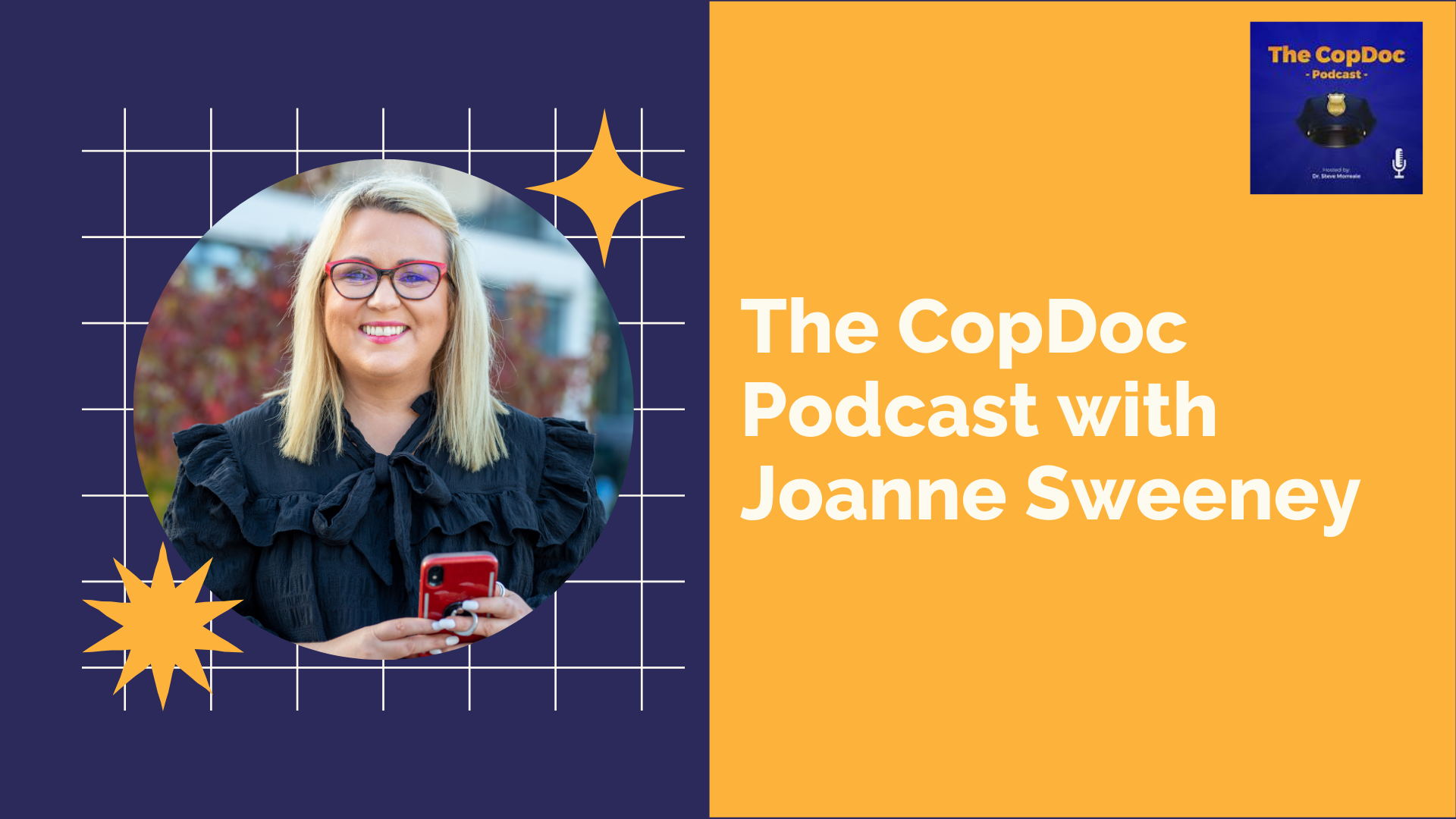 I joined Dr. Steve Morreale on CopDoc Podcast recently. Based in Boston, Steve and I discussed policing and the public sector leveraging social media for citizen engagement.

Find out more about the podcast

Why are you so keen with the role and the value of social media in the public sector?

I became very invested in the work of law enforcement. And Interestingly, none of my family members ever were members of The Guardian. And so it was just something that I decided to take on. And then I did a Masters in journalism while I was still working. And I wrote about the impact of the Morris tribunal on the county of Donegal and on the police work.

So fast forward about eight years, and I was conducting my second bit of research for a master's degree in digital marketing. And I would have to pitch the idea to my lecturer. And I said, I want to investigate how An Garda Siochana use social media for crime prevention, community engagement and crime investigation. And they said, well, that's a wonderful idea, Joanne, but best of luck with that. I'm not sure it will happen. But I made my pitch to Garda HQ in Phoenix Park in Dublin and explained what I believe was the very importance of doing this first ever primary research. And they agreed. And so I guess my work as a journalist, I also then worked in broader communications. And I made an intention and a promise to myself that I was going to be at the cutting edge of communication. So no matter how much my industry changed, I would be at the forefront. But I still couldn't get rid of that just interest in law enforcement and policing and then more broadly public sector. And so the Masters became a reality. And then six months later, I published my first book, Social Media Under Investigation, Law Enforcement and the Social Web.

And that became a global insight into how police forces are using social media.

Where else you're looking and how that work translates both to business, but more importantly, helping to change the approach that police will take to use it as a medium, as a communications vehicle?

So I'm very clear when I get challenged by policing or more broadly, government or public sector on the value of social media that I have to provide evidence. And I have this line which is, do not bring an opinion to a data party. So I use that also when people are kind of pushing back to me with their opinions about the role of social media, I think evidence and practice is very, very important. So I am a practitioner of everything that I teach. I'm also an academic and a researcher. And so I can bring both of those disciplines to bear. And one gap that I identified in all of this conversation is that there is no benchmark that exists for what success looks like on social media from a policing or a government or a public sector standpoint. You'll always get benchmarks around social media generally, but by and large, that will focus on the private sector. And we have to be very clear that there is a huge distinction between social media for the private sector and the commercial versus social media for the public sector. And that really lies in the fact that when we are engaging in social media or policing or public sector, the conversion and the real success metric is public trust and public engagement and not a sale of a product or a service.

So I decided to launch the state of social media report, as you correctly said, Ireland, Australia and the US. And what that does is it takes a large sample. So the Irish sample is 500 government agencies, the Australian sample is 1200 government agencies, and the US sample, I think is around 1700. Yeah. And so what that allows me to do is it allows me to do quite large samples and have a look at quantitative data and have a look at average engagement rates on social and then put that out there as benchmarks for success. I do a little bit of qualitative and have a look at content. What kind of content and content formats work. And so I think then that has opened me to new markets and what it also does, actually, I had somebody from the city of Phoenix actually reach out last week said, hey, I've got a presentation to make next week. Can you help me? And I said, yeah, you have this report. It's absolutely free. And he was delighted. And so I'm really creating AIDS for communicators to influence inside their organizations on the importance of social media because there are now more people in the world using social media than aren't.

When you don't keep it up, it's almost worse than not having a footprint. But who should keep this up? When you say, okay, start this, you've got me thinking about so many things. I saw some of your reports saying YouTube being the most used media outlet. Talk about what those are and what you have found. What's the most used social media outlet?

So the most used social media outlets within law enforcement, government and public sector agencies are Facebook and Twitter, where they start. Mostly they start on Twitter or even LinkedIn. And why? Because there's a certain level of comfort on those channels, because they're corporate channels and because all agencies have PR and media teams. And they're used to issuing press releases, writing speeches during press conference and speaking with the corporate voice. They tend to navigate to Twitter and LinkedIn. Other agencies realize that Facebook is the public facing social network. So if you want to engage with your citizens on the ground, in the community, in the jurisdiction where you have responsibility, then you need to be on Facebook. So then we have Facebook coming up. People probably don't realize that YouTube is the world's second largest search engine and one of the top social networks. So as we know, it's a video networking and video streaming site. But YouTube is owned by Google and Google is the biggest search engine in the Western world. And then YouTube is the world's second-biggest search engine. And so if we think about search that Google and YouTube is dominating, and that's where people are consuming video and they're going to their Google search and they're inputting questions there.

And so while Meta that owns Facebook and Instagram and WhatsApp. And messenger is dominating in the social sphere, then you actually have TikTok coming along and winning market share of Meta. And in fact, only a couple of weeks ago in their latest reports, Meta's market share fell, such as the growth of Tik Tok. So all of these channels have different objectives and different audiences. But the agility of these government agencies to be on all of them. And I love what you said earlier, the staying power, the staying power isn't there because guess what? There is complete overwhelm. And what I'm also finding is that social media as a task, as an output is now being layered upon comms professionals work that might not have been in your original job spec. But guess what? Now it's important. And can you do Twitter as well on Facebook? Just it won't take you long. Can you do it? And so the strategic approach to social media is lacking. And that's why you don't have to stay in power.