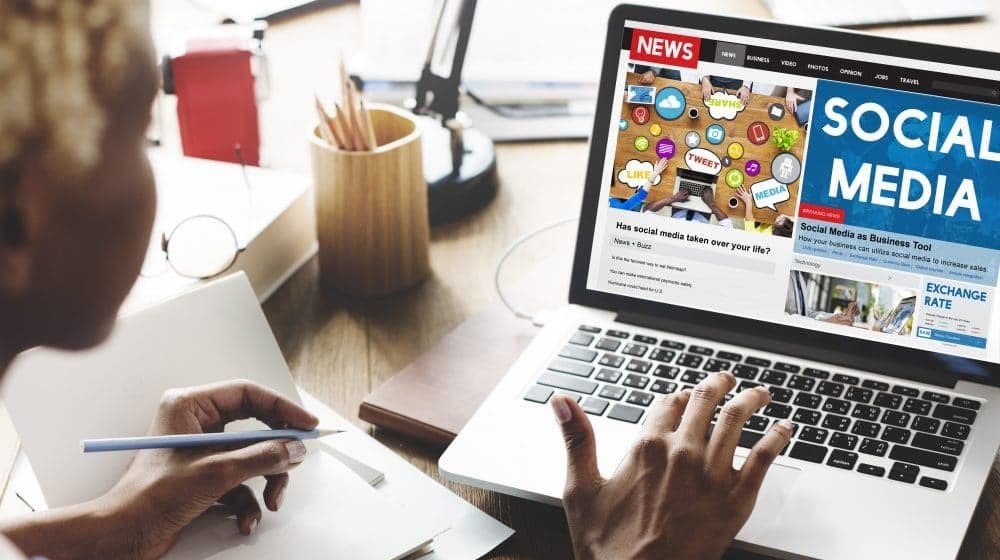 COVID-19 forced government and public agencies to embrace social media like never before and the UK government on social media was no different. Without a vaccine, the only way to combat the global pandemic was to adhere to public health guidance. Social media became the main channel to broadcast messages and engage with citizens as countries went into lockdown.

SocialBakers has conducted a study, and published in PRWeeK,  measuring the performance of 20 government departments on three social media platforms – Facebook, Instagram and Twitter – for the three months from the start of March 2020, in an exclusive study.

I will publish my study of Irish government and public sector agencies in Q4 of 2020 in my latest State of Social Media Report.

The ability of government departments to communicate with the people they serve has always been of paramount importance, and it takes skill and creativity to be heard above the clamour via the medium of social media – even in normal circumstances.

The COVID-19 crisis has raised the importance of clear, informative voices across social media to mission-critical status, with the government also combatting potentially harmful disinformation propagated by ‘bad actors’ across platforms.

But which departments have been most effective, so far, at using social media to interact with the public since the pandemic arrived in the UK?

This article was originally published in PR Week. According to YouGov, Facebook is the most popular social-media platform in the UK. Millennials have the most positive opinion of the platform, followed by those from ‘Generation X’ and then ‘Baby Boomers’, and the platform is slightly more favoured by women than men. The most important social-media metric for government departments, by far, is how much the public interacts with their posts, by 'liking', sharing or commenting on them.

By this measure, the Foreign and Commonwealth Office (FCO) was the front runner, with more than 460,000 interactions. This was more than double that of the Department for Education (DfE), in second place with 200,000 interactions during the same period.

The FCO posted 152 times during the time period measured, while the DfE posted 400 times.

Alison Daniels, digital transformation leader and deputy director of comms at the Foreign Office, told PRWeek: "Foreign Office social media travel and embassy channels have played a key role in our response to the coronavirus pandemic. We’ve provided hundreds of thousands of British Nationals with vital travel information, including details on how to get home to the UK and live updates to questions on travel, finance and welfare from Brits across the world."

She added: "Facebook has been an incredibly powerful tool, helping us to reach and assist British travellers with 38,000 brought home to the UK on government charter flights."

Gemmaine Walsh, director of communications at DfE, said: “The coronavirus pandemic has led to an unparalleled level of public engagement across all our social-media channels, including the DfE Facebook page, which is aimed primarily at parents, teachers and support staff.”

She added: “Education and schools are hugely important and emotive issues at the best of times and even more so right now. That’s why we’ve worked hard to deliver timely and accessible information online – from parent and teacher Q&As to explainers and rebuttals, at the same time as highlighting advice on gov.uk to give people the information they need.” In addition to the highest interaction overall for the past three months, our research also measured the top individual posts for interaction during the same period.

The FCO took the top four slots. Its post detailing how it stepped in to provide assistance to a British national who becamse stranded in India because of corinavirus won the top slot, with nearly 185,000 likes, shares or comments.

And a focus on how the NHS was coping with the coronavirus crisis saw the MoD’s post about the army assisting the health service with logistics score highly among the top individual Facebook posts, with more than 23,000 likes, shares, or comments.

Other top Facebook posts included the DfE, offering parents tips on activities to do with their children while they could not attend classes in person. The study tracked how many new followers government departments had added since the crisis began.

By this measure, the Ministry of Justice (MoJ) acquired the most, with more than 7,000 new followers, a rise of 40 per cent.

YouGov said Instagram was the second most popular social-media platform in the UK. Once again, millennials had the most positive opinion of it, followed by those from ‘Generation X’ and ‘Baby Boomers’, and it was slightly more popular among women than men. The picture-sharing platform lends itself to potentially high engagement with the public, provided those behind the controls can serve up compelling content.

Leading the charge, the MoD trounced all potential rivals for pole position, with more than 340,000 engagements from only 71 posts.

The department, which frequently deploys images of military personnel and equipment as its content of choice, has scored highly in previous studies.

Carl Newns, director of defence communications at the MoD, told PRWeek: “Our approach has been to develop content (images and video supported by stories) that places our people at the heart of the narrative and that shows individual case studies of military personnel supporting the NHS.”

In second place was the FCO, which had nearly 70,000 interactions with 88 posts. Once again, the MoD dominated the proceedings, with all six of the top posts by interaction.

Many of these centred on Major Tom Moore, the war veteran who raised more than £32m for NHS charities by walking 100 laps of his garden ahead of his 100th birthday in April.

The centenarian was awarded a knighthood for his efforts and made an honorary colonel.

Top posts from the MoD included images of an honour guard provided to him while completing his fundraising walk, his appointment to the rank of colonel, and posts about support to the NHS and celebrations of VE Day in May. 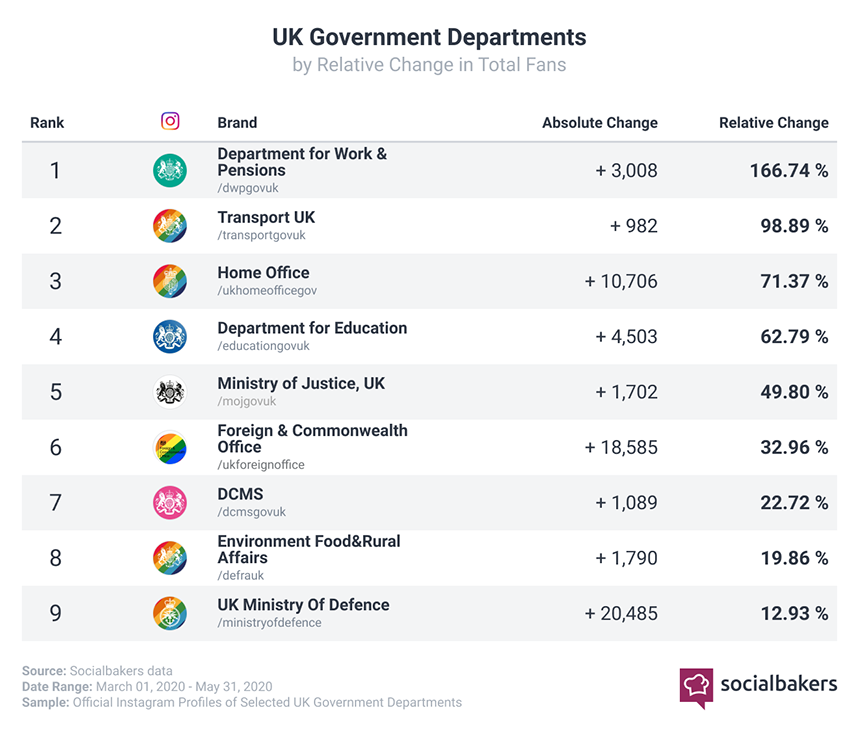 The DWP was the main winner for new followers, perhaps reflecting the rush of new benefits claimants as the pandemic began to takes its toll on the economy and jobs.

In second place was the Department for Transport (DfT), with nearly 1,000 new followers – up almost 100 per cent.

The Home Office was in third place, with nearly 11,000 new followers and up more than 70 per cent.

YouGov said Twitter was the third most popular social-media platform in the UK.

Millennials had the most positive opinion of it, followed by those from ‘Generation X’ and ‘Baby Boomers’ – but this time, it was slightly more popular among men than women. Twitter can work well for starting a discussion – and therefore forging interaction – with a government department. It is also a good way for government social-media teams to quickly take the temperature of what the public is talking about and join the discussion with timely content.

Looking at engagement; the Department of Health and Social Care (DHSC), with its critical public health messages on preventing the spread of coronavirus, was the runaway leader, with more than 850,000 interactions from nearly 1,200 posts over the past three months.

Wendy Fielder, interim director of comms at DHSC, said: “From the start, we have positioned Twitter as a key government social channel for COVID-19 information and advice, producing content with clear messages and engaged directly with our followers to give the most up-to-date guidance and to challenge misinformation.

“We will continue to use all our social-media platforms to support the health and wellbeing of the nation as we continue the fight against this deadly virus.”

Meanwhile, the MoD had more than 280,000 interactions with almost 500 posts during the same time frame. Looking at the best-performing individual posts in terms of interaction on Twitter, the Cabinet Office took the top three slots, two of which were for identical tweets, posted one minute apart, with the simple message: “Stay at home. Save lives. Anyone can spread coronavirus”, garnering more than 60,000 interactions between them.

Another Cabinet Office tweet which scored highly was one apologising for a post from the official UK Civil Service account immediately following a press conference hosted by Boris Johnson, in which the Prime Minister exonerated his chief strategist, Dominic Cummings, of any blame for breaking government social distancing rules.

A tweet from the UK Civil Service handle following the conference read:

However, it was swiftly deleted and the Cabinet Office posted an apology, which itself amassed 30,000 interactions. DHSC notched up the most new followers during the measured time-frame.

Commenting on the results of the study, Yuval Ben-Itzhak, chief executive of Socialbakers, said: “On Twitter, DHSC has led the way both in terms of activity and engagement over the same time frame. Health has been at the forefront of people's minds during the past few months and Twitter tends to be the platform to which people turn to get the latest news and to stay updated.”